What is Colchicine used for?

Colcrys (colchicine) is used in the prevention and treatment of gout attacks. Gout symptoms generally develop suddenly and involve only one or a few joints. The knee, ankle, and big toe joints are the most commonly affected. Gout is caused by high levels of uric acid in the blood. When uric acid levels become too high the uric acid can form hard crystals in your joints that cause pain. colchicine works to decrease swelling and lessening the uric acid build up. Colcrys is also used to prevent pain attacks in the chest, joints, or abdomen caused by familial Mediterranean fever. It’s thought to work by decreasing the production of a certain protein that builds up in those with familial Mediterranian fever. colchicine is not a medication that can be used to relieve other causes of pain.

Your doctor may also prescribe colchicine for reasons not included on the official product labelling. Only use colchicine for this purpose if specifically instructed to by your doctor. This medication can also be used to reduce inflammation and swelling of the sac covering the outside of your heart (this condition is called pericarditis). 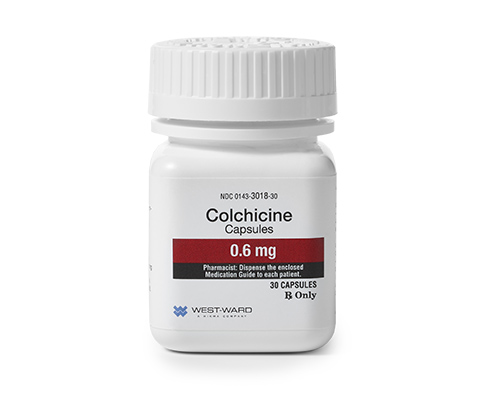 How to Use Colchicine?

Read the Medication Guide provided by your pharmacist before you start taking colchicine and each time you get a refill. If you have any questions regarding the information, ask your doctor or pharmacist.

Take colchicine orally either with food or without, as directed by your doctor. Dosing recommendations vary widely and could be very different from the following suggestions. Always closely follow the directions from your doctor as taking too much colchicine can increase your risk of side effects.

Colcrys works best when taken at the first sign of an attack. The dose is recommended to be 1.2 mg at the first sign of an attack, followed by 0.6 mg an hour later. The maximum advised dose is 1.8 mg over a one hour period. Ask your doctor about how soon you should repeat the treatment with the medication if you have another attack of gout. If you’re taking colchicine for pericarditis or to prevent gout attacks discuss the appropriate dosing schedule with your doctor and carefully follow their directions.

If you take this medication to prevent pain attacks caused by familial Mediterranean fever, the normal dosage is 1.2 to 2.4 mg per day. The total dose can be taken either once a day or divided into two daily doses. If you take more colchicine than recommended it can increase your chances of side effects. If you’re taking colchicine regularly use it regularly to gain the full benefits from it and take it at the same time daily to help you remember. Avoid consuming grapefruit in any form while on colchicine unless your doctor’s told you otherwise.

Why Buy Colchicine Online From Your Canada Drug Store?

Here are some reasons to buy your colchicine generic Canada from us:

Here are a few advantages of purchasing your medications online with Your Canada Drug Store:

Drug interactions may change how colchicine works or increase your chances of negative side effects.

The following drugs interact with colchicine:

This is not an exhaustive list of drug interactions, so give your doctor a list of all medications you take before you buy colchicine online. This will help them monitor properly for drug interactions.

Click on the letter to find medication by name

DISCLAIMER: The following is presented for exclusively informational purposes for those who want to buy colchicine online and is not intended for use as a substitute for professional medical advice. Always seek out a physician or other licensed health care provider’s advice for your medical condition or treatment plan before you buy colchicine generic Canada. Do not ignore professional advice or delay seeking it out because of the information provided here.