What is Estradot TTS used for?

Estradot is a female hormone (estrogen). It’s used by women to diminish symptoms of menopause. These symptoms generally come about by the body making less estrogen. If you’re using Estradot for the treatment of symptoms only around and in the vagina, you should consider products that are applied directly to the vagina before medications delivered through other routes. 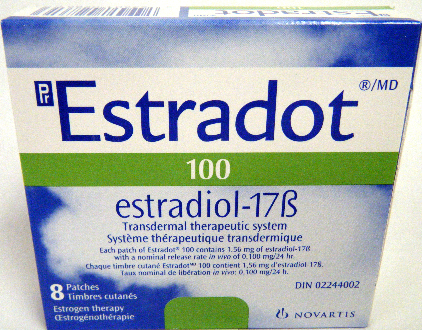 How to Use Estradot TTS?

Always read the information that comes with you medication when you buy Estradot online before you start using this medication. Take the backing off of the patch and apply it to a clean, dry area of the body as directed. The Estradot patch should only be applied to specific areas of the body. Different brands of the patch are to be applied to different parts of the body, ask a health care professional if you have any questions.

Press your patch in place for approximately 10 seconds to ensure it stays on and do not apply to irritated, oily, or broken skin. Try not to apply the patch to areas of the body where it could be rubbed off easily. Generally you will replace the patch every 3-4 days, follow this schedule carefully.

Wait at least a week before re-applying a patch to the same area. To dispose of the old Estradot patch, fold it in half with the sticky side together and throw it away from pets and children. If a patch falls off you should reapply it to a different area. Change your patches at the same time each week and mark your calendar to help you remember.

Estradot contains estradiol and it is known to interact with many other drugs.

Tell your doctor if you’re taking any of the following medications before you start Estradot:

Estrogen when used alone or with progestin has rarely caused some very serious side effects. Talk with your doctor about the risks and benefits of this medication and decide if it’s right for you. Estrogens are not to be used in the prevention of dementia or heart disease. Estrogens can increase the risk of endometrial cancer. Taking progestin as instructed by your doctor can help to decrease the risk. Tell your doctor immediately if you experience any unusual vaginal bleeding. In postmenopausal women estrogens might increase the risk of ovarian cancer, dementia, serious blood clots in the legs, and stroke.

When used alone, estrogens don’t appear to increase the risk of breast cancer when used for as long as 7 years. Estrogen, when taken in combination with progestin can increase the risk of stroke, blood clots, dementia, heart disease and breast/ovarian cancer. The risk of serious side effects depends on the dose of estrogen and for how long it is used. Therefore, estrogen should be used at the lowest dose that’s effective and for the shortest amount of time. Talk about the use of this medication with your doctor and check in regularly with them. If you’re going to use estradot long-term go in for regular physical exams as suggested by your doctor.

Why Buy Estradot TTS Online from Your Canada Drug Store?

Here are some good reasons to buy Estradot online from us:

Click on the letter to find medication by name